This morning I attempted to make a lemon berry quinoa pancake recipe that I had been eyeing on Pinterest for awhile. As you can see from the photo above, the pancakes were crap. The first time I poured the pancake batter onto my skillet, the pancake totally fell apart. I quickly poured the batter from the skillet back into the batter bowl and added flour. What I got was what you see above, a pancake that held together a little, but still not too good. My next go round, I added 1-2 Tbsp of ground flaxseed to the batter because I obviously needed a binder.

Finally, I was able to cook a pancake without to much trouble. I thought I had saved the recipe...until I tasted them. They were not awful but.....I did not like them. Maybe it is just me coming to the realization that I officially do not like quinoa prepared sweetly. Sigh.

I have had a series of flops lately. First it was the vegan red velvet brownies, next it was the 3 ingredient cake balls, now the quinoa pancakes.

Although I will comfort myself with the thought that at least those recipe flops did not top my biggest kitchen mistake to date.

When I was living at a co-op in Berkeley, CA 13-ish years ago, I had signed up to make Sunday brunch for the whole co-op. I got up early and decided on scrambled eggs and pancakes. I pulled out The Joy of Cooking and went to work. The eggs were perfect and the pancakes- beautiful...until I tasted a pancake. Salt! I had accidentally used salt instead of sugar in the pancakes. One co-op member insisted he try a pancake before I trashed them- because they were so visually appealing. He promptly spit the pancake out in the trash can. Luckily, I had enough time to make another batch of pancakes before brunch started. :)

With all the recent flops, I needed a recipe that was sure to turn out. :) Enter flourless protein brownies! 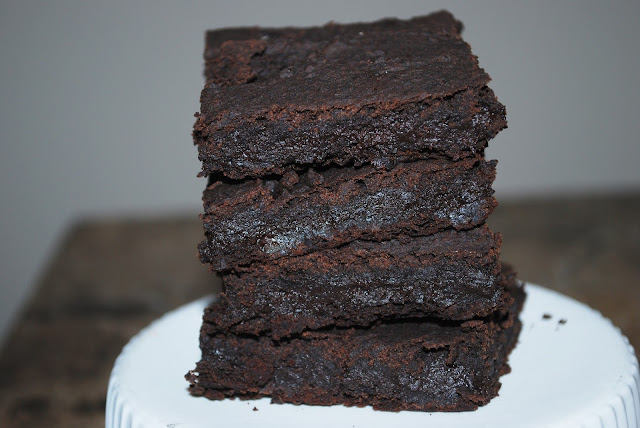 
Preheat oven to 350 and grease a 9 inch baking dish. Place all ingredients in a food processor and process until smooth. Transfer batter to your prepared baking dish. Bake 30 minutes or until a toothpick inserted in the center of the brownies comes out clean. Allow to cool before cutting. Store leftovers in the fridge.

*I also noticed the brownies were a smidgen more crumbly than I would have liked. Next time I might add in a flax egg for some extra binding (flax egg= 3 Tbsp of water mixed with 1 Tbsp GROUND flaxseed allowed to sit for 10 minutes until a gel forms).