I have a slight obsession with making recipes vegan. I was perusing Pinterest today and saw this recipe pinned by Erica at The Healthy Junky. It sounded so amazing! I knew I had to attempt my veganization! Weekends, especially Sundays, are the times I really like to spend a lot of time in the kitchen. However, this was a very quick Sunday dinner! 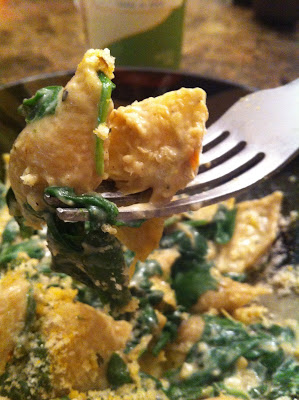 I was a little nervous about using the called for (vegan) cheese. I have tried several brands, including daiya, over the past 6 months and I just did not like them at all. However, recently since I have been cutting down on cheese, I decided to try a few of the vegan cheeses again. The second time around I could say I almost liked them! They are a bit pricey so I use them sparingly and I don't buy them all the time. I have found a few brands that I buy when I want to create recipes such as this. I have also found that if you use the vegan cheese as an ingredient verses eating it plain, it seems to taste better.  :)

Adapted from The Pioneer Woman